Multimodal analgesia is defined by the American Society of Anesthesiologists (ASA) Task Force on Acute Pain Management in their 2012 Practice Guideline update: “Multimodal techniques for pain management include the administration of two or more drugs that act by different mechanisms for providing analgesia. These drugs may be administered via the same route or by different routes.” Anesthesiology 2012; 116:248 –73 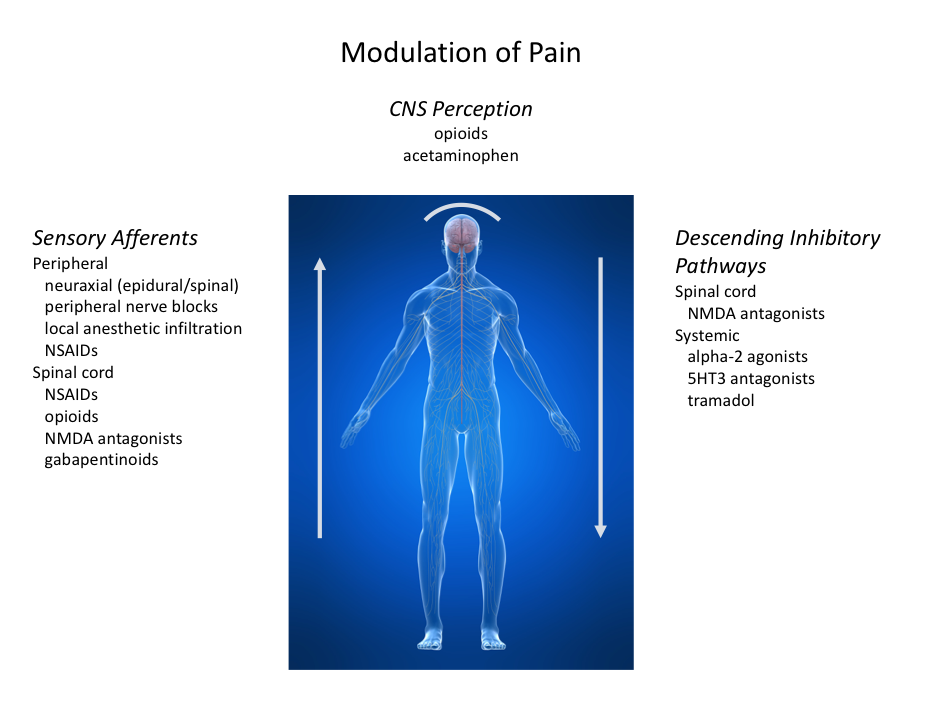 Postoperative pain control is essential not only to relieve suffering but also to prevent complications that can be exacerbated when a patient is in pain. These include reduced cough leading to atelectasis and pneumonia, decreased mobility leading to increased risk of deep venous thrombosis, deconditioning, ileus and prolonged recovery.  Recent advances in pharmacologic agents as well as development of Enhanced Recovery After Surgery (ERAS) protocols have changed how we manage postoperative pain.

One goal of ERAS protocols is to minimize narcotics as this leads to quicker return of bowel function and can shorten hospital stay.  Most ERAS protocols use a multi-modal approach to treatment of post-operative pain. This means using more than one pharmacological class of analgesic medication, with different modes of action, to allow improved analgesia while minimizing side effects.  The common medications given both pre-operatively postoperatively include: Nonsteroidal anti-inflammatory drugs (Toradol ®, Ibuprofen ®), selective cyclooxygenase-2 (COX-2) inhibitors (Celebrex ®), Acetaminophen (Ofirmev®, Tylenol ®), Gabapentinoids (Gabapentin®, Pregabalin ®), Intravenous opioids such as hydromorphone (Dilaudid®) and morphine, and oral narcotics such as tramadol (Ultram®), codeine (Tylenol #3®), hydrocodone (Norco®), and oxycodone (Percocet®, Oxycontin®) (1,2,3).

Non-steroidal anti-inflammatory (NSAID) medications are a mainstay of pain management in the postoperative period after most surgery both given alone and in addition to narcotics (1, 2, 3, 4). This includes scheduled Toradol® (15-30 mg IV q 6 hr , decrease to 15 for age >75) and then ibuprofen when the patient is tolerating oral meds (400 mg po q 4-6 hr). Due to the associated risks, prolonged scheduled use is discouraged (max 5 days). The use of NSAID medications in healthy patients has been shown to be safe, with minimal risk to the kidneys and no increased risk of bleeding (5,6). However they should be avoided in patients with renal insufficiency, gastrointestinal ulcers, increased bleeding risk and inflammatory bowel disease. In addition, there is early evidence that NSAIDs may increase the risk of anastomotic leakage after colonic or rectal anastomosis and further research is needed to clarify which specific medications are safe for use after colorectal surgery (8).

Cox-2 inhibitors have also been studied for use in the post-operative period. The Cox-2 inhibitors selectively inhibit cyclooxygenase-2 enzyme in the inflammatory response chain, decreasing the associated pain while minimizing some of the risks found in NSAIDs such as peptic ulceration and bleeding. The Cox-2 inhibitor most commonly used is Celecoxib (Celebrex), given at 200 mg po twice daily.  A single dose of 200 mg may be given preoperatively. A recent systematic review of randomized controlled trials revealed that the analgesic efficacy and tolerability of single-dose COX-2 inhibitors were more effective than opioid-containing analgesics and similar to non-selective NSAIDs in post-operative pain management. In addition, they found that the adverse effects of single-dose COX-2 inhibitor used in short-term post-operative pain management were generally mild and less than non-selective NSAIDs, although there was no significant difference (9).

Acetaminophen (Paracetamol) is a common non-narcotic used for postoperative pain. It has a different mode of action than NSAIDs and less anti-inflammatory effects. Ofirmev® acetaminophen injection has become an important adjunct to multimodal analgesia in the postoperative period when patients are not taking per-oral medication. It has been shown to facilitate reduction in opiod use and therefore reduced postoperative nausea and vomiting (10). After oral intake resumes, oral acetaminophen may be given 1 gram q 8 hours. However, should be avoided in patients with liver disease and should not be combined with oral narcotics that also have acetaminophen in them such as Norco ®.

Gabapentinoids: Gabapentin and pregabalin are a class of antiepileptic medication that is also commonly used to treat chronic pain syndromes such as neuopathy, postherpetic neuralgia and neuropathic pain in general. It decreases nocioception by inhibiting the release of excitatory neurotransmitters in the dorsal root ganglia and afferent nerves. Its use for acute postoperative pain has been increasing over the last decade with the awareness of the benefit of multimodal regimens for pain control. It is relatively safe but side effects include: increase in postoperative sedation, dizziness, and visual disturbances. A recent systematic review concluded that gabapentin and pregabalin are effective in reducing pain intensity, opioid consumption and opioid-related adverse effects after surgery (11).  The optimal dosing of Gabapentin in the perioperative period is still unclear.  In a review from 2013 Schmidt et al found that higher dose regimens appear more effective than lower dose regimens and that dosing may be initiated preoperatively, intraoperatively or postoperatively to reduce early postoperative pain.  They also concluded that the optimal duration of treatment is unknown, but studies with the most compelling outcomes have given gabapentinoids for up to 2 weeks. Therefore, they recommended Gabapentin 1200 mg given 2 hours prior to surgery, but also suggested considering giving the dose the night before. This was then followed by 600 mg three times a day for up to two weeks (12).  At NorthShore University Healthsystem in Evanston, Illinois our ERAS protocol calls for Gabapentin 600 mg PO x 1 to be given with a sip of water when the patients arrives to Ambulatory Surgery Unit. We do not give to patients on hemodialysis or to patients > 70 years old. We give 300 mg to patients with decreased renal function. We then give 100 mg PO TID while they are inpatients in the postoperative period.

Narcotic medication: Since its introduction in the late 1970s Patient-controlled analgesia (PCA) revolutionized post-operative pain control by allowing delivery of analgesics immediately upon patient demand through an infusion pump. This allowed decreased overall narcotic use, better patient satisfaction and shorter hospital stay compared to intermittent nurse administered narcotics (13). With the widespread use of minimally invasive surgery decreasing postoperative pain and shortening hospital stay, PCA use may be on the decline. For instance, it is no longer automatically ordered at our institution after minimally invasive abdominal surgery. As part of the ERAS pathway at NorthShore University Healthsystem, the patient is started on clear liquids six hours after surgery and the only narcotics ordered are Tramadol 50 mg PO q 6 hr PRN (max dose: 400 mg/day or 300 mg/day of age > 75). This medication is avoided in patients with history of seizures or if they are taking SSRI meds.  If the patient has breakthrough pain, Norco 5/325 mg tabs 1-2 PO q 4 hrs PRN are used. If the patient is not tolerating per-oral intake, breakthrough pain is managed by hydromorphone injection.

Nerve blocks:  Local nerve blockade has been used to decrease postoperative pain for many years. This began in the form of single injection spinal anesthesia and continuous infusion through epidural catheters. Unfortunately these techniques limit patient mobility and require urinary catheter. With the advent of Liposomal Bupivacaine, lasting up to 72 hours, transversus abdominis plane block (TAP) before abdominal surgery offers several advantages. It is an easily performed, cost-effective, opioid-sparing adjunct to a multimodal pain management regimen after laparoscopic abdominal surgery. There is minimal procedure-related morbidity (14).  One study comparing TAP to epidural in colorectal surgery showed higher rate of urinary retention in the epidural group and longer hospital stay. However the TAP group had higher rates of nausea and vomiting(15).  TAP block appears to be an effective strategy to allow opioid reduction following abdominal surgery but more comparative trials are indicated (16).